Annelida is a group commonly referred to as segmented worms, and they are found worldwide from the deepest marine sediments to the soils in our city parks and yards. Through most of the 20th century Annelida was split into three major groups; Polychaeta, Oligochaeta (earthworms etc.) and Hirudinea (leeches). Earthworms and leeches are the familiar annelids for most people, but polychaetes comprise the bulk of the diversity of Annelida and are found in nearly every marine habitat, from intertidal algal mats downwards. There are even pelagic polychaetes that swim or drift, preying on other plankton, and a few groups occurring in fresh water and moist terrestrial surroundings. Around 9000 species of polychaetes are currently recognized with several thousand more names in synonymy, and the overall systematics of the group remains unstable (Rouse and Pleijel, 2001).

It is now recognized that Oligochaeta and Hirudinea, comprised of several thousand species, form a clade and should be referred to either as Oligochaeta (Siddall et al., 2001) or Clitellata (Martin, 2001). Moreover, it is possible that this group may well belong inside Polychaeta, thus making Polychaeta synonymous with Annelida (McHugh, 1997; Westheide, 1997; Westheide et al., 1999). Echiura (spoon worms), at one time regarded as an annelid group (Sedgwick, 1898), has been excluded from Annelida for many years (Newby, 1940). Evidence now suggests they are in fact annelids (Hessling and Westheide, 2002; McHugh, 1997), though their placement within the group is unresolved. The former phyla Pogonophora and Vestimentifera have also recently become regarded as a single, clearly annelid, group (Bartolomaeus, 1995; Nielsen, 1995; Rouse and Fauchald, 1995), and are now known by the original name, Siboglinidae (see Rouse and Fauchald , 1997 and McHugh 1997). Undoubted annelid fossils, such as Canadia, are known from the Burgess Shale deposits.

Until relatively recently the most commonly used system to divide polychaetes was as 'Errantia' and 'Sedentaria'. This was essentially a system of convenience with no real intention of depicting evolutionary relationships. This classification was supplanted in the 1960s and 1970s by ones which split polychaetes into as many as 22 orders with no explicit linkage between them (Fauchald and Rouse, 1997). A recent cladistic analysis of Annelida and other groups has resulted in a new classification of polychaetes (Rouse and Fauchald, 1997), with the group split into two main clades Scolecida and Palpata. Scolecida is a small group of less than 1000 named species, and these worms are all burrowers of one form or another, with bodies reminiscent of earthworms. Palpata comprises the vast majority of polychaetes and is divided into Aciculata and Canalipalpata. Aciculata contains about half of the polychaete species and largely encompasses the old taxonomic group Errantia. Representatives of this lineage are characterized by having internal supporting chaetae, or aciculae, in the parapodia. It includes major groups such as Phyllodocida and Eunicida, which tend to be mobile forms with well developed eyes and parapodia for rapid locomotion. Canalipalpata, a group with more than 5000 named species, is distinguished by having long grooved palp structures that are used for feeding. Canalipalpata is divided into Sabellida, Spionida and Terebellida. Most of these groups’ members live in tubes and use their palps to feed in various ways.

The annelids (Phylum Annelida) are also called the segmented worms due to their segmented bodies. This group includes the most familiar of all invertebrate worms. Earthworms, freshwater worms, leeches, and marine worms are all annelids.

This group is also called "bristle worms" because most annelids have tiny chitinous bristles called setae. The setae help terrestrial annelids grip their surroundings, and they aid aquatic forms with swimming.

Annelids are worldwide in distribution, and they are found in marine environments, fresh water, and terrestrial soil. Some annelids are predators, others are vegetarians, and some leeches are bloodsuckers.

This list may not be complete but is based on published studies.

Figure 1: Summary of phylogenetic hypothesis in Rouse and Pleijel (2001). Alternative arrangements are discussed in the Discussion of Phylogenetic Relationships. The position of Clitellata/Oligochaeta (includes earthworms and leeches) and Echiura is yet to be resolved.

The most recent comprehensive systematization of polychaetes, that proposed by Rouse and Fauchald (1997) from their cladistic parsimony analyses, has been used here (Fig. 1) with some alterations (see Rouse and Pleijel, 2001). Allowing for the likely errors in the placement of many taxa, and the fact that there were conflicting results included in the original analyses, the most fundamental problem inherent in the systematization used here may be that of the placement of the root for any tree of Annelida.

Basal annelids, according to Rouse and Fauchald (1997), are taxa such as Clitellata/Oligochaeta and simple-bodied forms within Scolecida. Their trees also excludes Echiura from Annelida. This result was based on outgroup choices such as Mollusca and Sipuncula, and may well be misleading. Alternative hypotheses are therefore worth outlining, though they do not follow normal cladistic practice. Storch (1968), following a detailed study on the musculature of Annelida, proposed that scale-worms, a diverse clade within Phyllodocida, are representative of the plesiomorphic condition for Annelida. He suggested that there was a radiation from this group, but that Chrysopetalidae were most closely related to scale-worms. The implication of his hypothesis is that Phyllodocida represents a paraphyletic group, from which all other polychaete taxa arise. Westheide (1997) (and see Westheide et al., 1999) suggests that the basic (i.e., plesiomorphic) 'body plan' of Annelida comprises features meaning that the root of the Annelida tree would be placed with taxa from Aciculata. This would either result in a paraphyletic Phyllodocida or Amphinomida, depending on which taxon is used as the root (Fig. 4).

From a molecular perspective, McHugh (1997) found Clitellata, Pogonophora (= Siboglinidae) and Echiura nested among various polychaetes using sequence data from elongation factor 1 alpha in a parsimony analysis (Fig. 4). The placement by McHugh (1997) of Pogonophora as a polychaete group was congruent with Rouse and Fauchald’s (1997) results, but those of Clitellata and Echiura were markedly different. The conflict between this molecular sequence data and the morphological results could be caused by several factors. One possibility is that Clitellata/Oligochaeta and Echiura have lost a number of morphological features that would help identify their sister group among polychaetes. Further morphological study, combined with sequence data, may uncover these 'losses' (see Hessling and Westheide, 2002). However, the molecular sequence data sets assembled to date have been marked by both a limited number of taxa and characters. An exception is Brown et al. (1999), where DNA sequence data from three nuclear genes across a wide taxonomic diversity of annelids was subject to parsimony analysis. They recovered some morphological groupings such as Cirratulidae, Terebellidae and Eunicida, but did not show a monophyletic Phyllodocida or Aciculata, nor did they find any parts of these taxa to be basal groups of Annelida. However, some expected groupings were not recovered. Martin (2001) found that the placement of Clitellata/Oligochaeta among polychaetes could not be resolved, and he could not recover a monophyletic Annelida owing to the placement of taxa such as Mollusca and Sipuncula. None of the major taxa used here, such as Palpata, Aciculata, Phyllodocida, Canalipalpata, Sabellida or Terebellida were recovered in Martin's (2001) analysis. Also less diverse taxa such as Nereididae, Spionidae and Aphroditiformia were not recovered.

Does the fossil record help?

In a review of the fossil record of annelids Rouse and Pleijel (2001) suggested that the oldest unequivocal fossil polychaetes, such as Canadia from the Cambrian, belong within Phyllodocida. Subsequent fossil polychaetes that can be confidently placed outside Phyllodocida do not appear until the Carboniferous. No other fossil polychaetes from the Cambrian can be unequivocally assigned to extant polychaete taxa. There are several likely appearances from the Ordovician, including Serpulidae, Spionidae and the radiation of Eunicida. Ensuing appearances suggest that by the end of the Carboniferous most major polychaetes lineages had appeared. The exception appears to be Scolecida, with the earliest known fossils being the dubious Archarenicola (Arenicolidae) from the Triassic, and one assignable to Paraonidae from the Cretaceous. With the rooting option employed in Figure 1, it appears that some of the earliest appearing fossil polychaetes belong to derived clades (e.g., Eunicida and Phyllodocida). This could be interpreted in two ways: (1) the root placement in Figure 1 is wrong, and so Aciculata, comprised of Amphinomida, Eunicida and Phyllodocida, may in fact represent a paraphyletic 'stem' group for the rest of polychaetes; (2) a number of major polychaete clades had already evolved in, or before, the 'Cambrian explosion', but fossils have not yet been found. The third possibility is that the overall topology used in Figure 1 may be profoundly incorrect. If we accept that the basic topology shown in Figure 1 is correct, but do not root the tree, then a diagram as shown in Figure 5 is the result. This may represent the most conservative representation of our understanding of annelid relationships.


The secretions of some earthworms distract predators using bioluminescence.

"Dozens of earthworm species from all over the world can secrete a  glowing slime, thought to startle predators. This particular worm, Diplocardia  longa, is found in sandy soils in southern Georgia in the U.S. and  can stretch to over half a meter in length…It turns out that chloragocytes—the cells in earthworms that  produce the bioluminescent ooze are part of a system that sequesters  toxins in the earthworm's body, much like a liver." (Hadhazy 2009)

Learn more about this functional adaptation.


The skin of a worm allows it to move and change shape by having fibers wound in a cross-helical form around and along its body.

"The skin of a worm is a cylinder comprised of fibers wound in a cross-helical form around and along the worm's body. By contracting the muscles in the body wall and increasing its internal pressure, the worm is able to change shape, with the fibers in the skin allowing the worm to go from short and fat to long and thin." (Courtesy of the Biomimicry Guild)
Learn more about this functional adaptation. 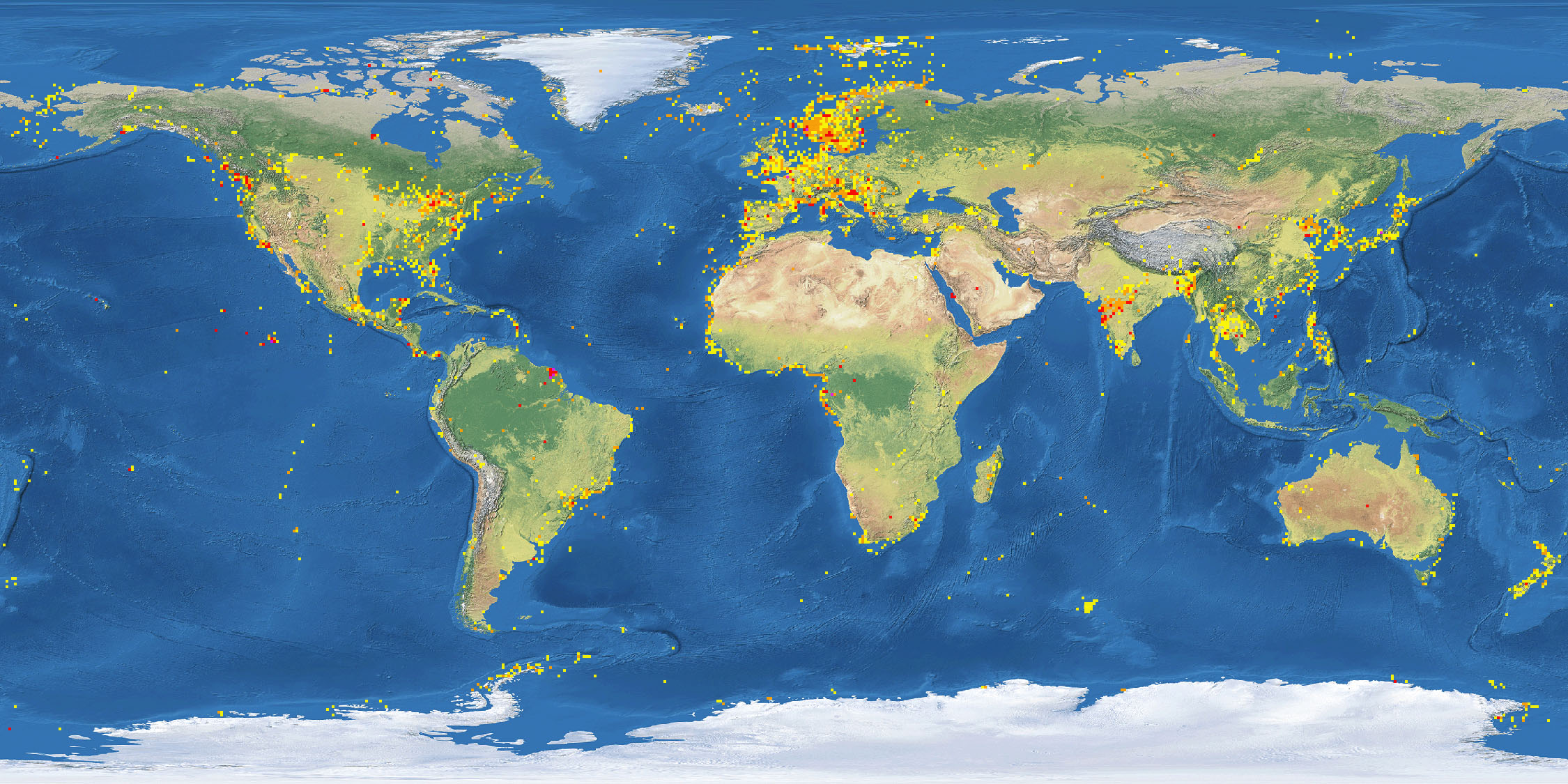 Annelids are a phylum including earthworms, leeches, polychaete worms, and some other worm groups(3). Annelids are also called segmented worms because a defining feature they all share is a body most of which is divided into segments, each of which contains parts of the basic body systems (2). This segmentation, or metamerism, allows annelids to move more efficiently and provides other benefits as well(2). Inside all of these segments, in a cavity known as the coelom, is fluid that presses against the annelid’s body, keeping the body firm so that it can bend and extend without breaking (1,2,3). Although segmented worms may appear simple, the organs inside them are highly developed; various annelids have organs that can sense touch, balance, and chemicals in their environment, and some even have eyes with lenses (2,3). While all annelids share some important physical characteristics, they live all over the world in a huge range of habitats on land and in the water (both freshwater and marine), with varying diets, feeding habits, reproductive methods, and life cycles (2,3).